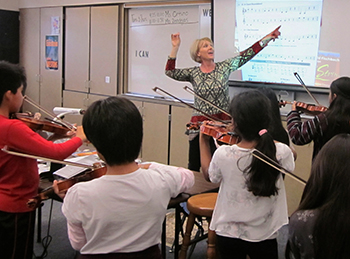 Fiddle Club, February 2017.
LAS teacher Jutta Massoud uses an Elmo Projector
thanks to a grant from the Livermore Rotary Club.

Fiddle Club was a program of the Livermore-Amador Symphony Association aimed at introducing elementary school children to playing the violin.

The students were given a violin, shoulder rest, and lesson book with practice CD for the two-month duration of Fiddle Club. As part of the program, the young fiddlers were also invited to attend a Livermore-Amador Symphony rehearsal at the Bankhead Theater.

Fiddle Club was offered at no cost to the students, thanks to funding from grants. A grant from the Livermore Commission for the Arts supported the 2018 Fiddle Club. 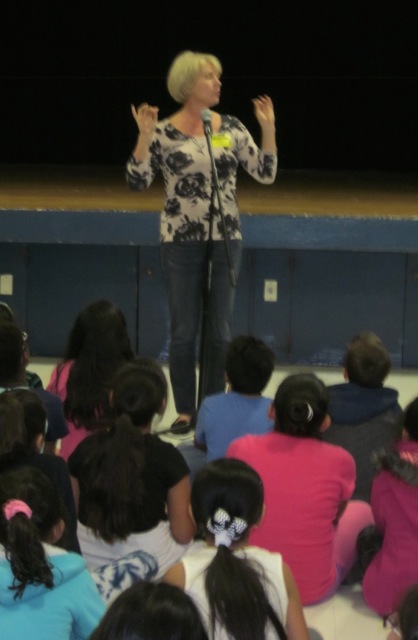 Many Fiddle Club stu­dents chose Or­ches­tra as their elec­tive when they started middle school.

In June 2018, Fiddle Club came to an end, but for a happy reason of redundancy: instrumental music, including violin instruction, returned to the elementary schools of Livermore.

The LAS Fiddle Club had 2 years at Junction, 2 at Jackson, and 2 at Marylin Avenue Schools in Livermore, plus a 2015 club in Dublin. We worked with 5th graders at first, but starting in 2016–17, after the Livermore School District had begun to re-introduce instrumental music into the elementary schools, we worked with 4th graders at the request of school administrators. The schools were thrilled that we shared the Fiddle Club with the students.

The 2017–2018 program of lessons was at Marylin Avenue Elementary School in Livermore during January and February 2018 and included a visit to the LAS February concert dress rehearsal. Teacher Jutta Massoud reported that the group was excellent. She used violins donated by Stan Houston (of Mozart, Einstein & Me) as well as the ELMO projector donated by the Livermore Rotary Club.

The 2016–2017 program, taught by LAS violin player Jutta Massoud, was described in November 2016 at an assembly at Marylin Avenue Elementary School in Livermore; the lessons, to 4th graders, took place during January and February 2017.

Also at Marylin Avenue Elementary, the 2015–2016 program took place during February and March. Jutta Massoud was the teacher and Susan Ivie was the substitute teacher for the weekly lessons, which were limited to 22 students. Both Massoud and Ivie are LAS violinists. 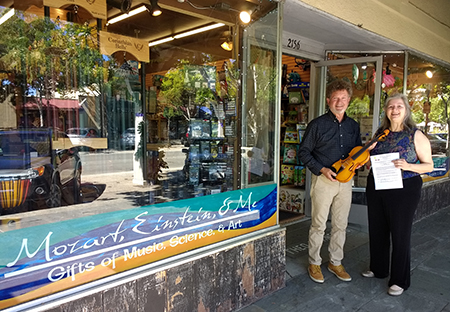 Stan Houston, owner of Mozart, Einstein & Me, presents
a violin to Denise Leddon, then president of LAS, in June 2017.

In 2014–2015, the program was offered in both Livermore and Dublin, California. Symphony players and Association board members Beth Wilson and Jutta Massoud introduced the program at a 5th grade assembly at Jackson Avenue Elementary School in Livermore. Although 32 students wanted to join, only the first 22 children to sign up could be accommodated. The weekly 45-minute after-school sessions ran for 8 weeks during January and February 2015. Jutta Massoud was the teacher, with assistance from her teenage daughter Anya. Fiddle Club at Kolb Elementary School in Dublin ran during March and April 2015.

Stan Houston, the owner of Mozart, Einstein & Me in downtown Livermore, donated ten half-size and ten three-quarter-size student violins/bows/cases to the Livermore-Amador Symphony Association for use in LAS Youth Outreach programs. The violins were used starting at the Marylin Avenue Elementary School 4th grade Fiddle program of 2017–18.