Roster and Registration
Roster information is to be used for LAS business only, unless explicit permission has been obtained from individuals for additional use (and, yes, this applies even to benign music-related uses). The roster is password-protected and available in two formats: roster as an Excel document or the same roster as a pdf file. Based on musicians info as of 4/26/22.

New musicians who have joined the orchestra, please fill out the New Musician Registration Form (password protected) and return it to the orchestra personnel manager, Bryan Waugh.

Get better acquainted with a few of our community orchestra players by watching the short videos (from 2020) on our Meet the Musicians page. 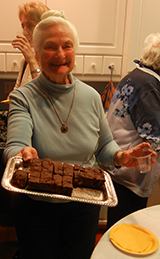 Nan Wood Davies joined the Symphony in 1964 and continued to play the flute with us for over 50 years. She and her husband, Walter Davies, were active members of the Tri-Valley arts community. Nan gave private flute lessons to many students in the Livermore area and played with Bay Flute Club, the Ohlone Wind Symphony, and her flute quartet, Silverwinds, as well as LAS.

Nan was a scientist and moved to the Bay Area to work at Lawrence Livermore Lab. She met Walter there, and they married on Dec. 28, 1963. After bearing and raising their two children, she re-entered the workforce, eventually working for Wind River Systems of Alameda and retiring in 2012.

Nan had a lifelong passion for cooking and baking, sewing, reading, and travel. She was an extremely active member of the Symphony Guild. She hosted meetings and events at her home, and there were always delicious treats at any function Nan was involved in. Gracious, warm, welcoming, and cheerful, Nan was a vital part of our community and will be sorely missed.

Marie was a member of the Guild’s nominating committee and co-chair of the Estate Sales committee at the time of her death. She had been a guiding light in managing, preparing for, and publicizing major fundraising activities of the Guild for years, from Treasures & Trivia

Virginia was the orchestra manager for years, doing everything from picking up and distributing mail sent to the LAS post office box to rounding up content for the Symphony Notes newsletter to picking up beverage-sales permits for Pops concerts. An article about her titled Community Mourns the Loss of Orchestra Manager was published in the Independent on 1/7/21. 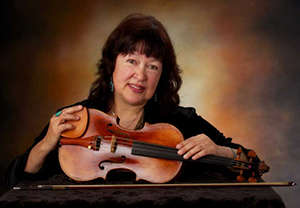 Kristina Anderson retires from LAS, 2020
In 2019, Kristina Anderson, our concertmaster since 2008, announced that she would retire from LAS at the end of our 2019–2020 season. (That was before Covid-19 wreaked havoc, including on the LAS concert season.) Longtime concertmaster of West Bay Opera (plus she is their union steward) and the Santa Cruz Ballet Orchestra and a member of the first violin section of the Oakland Symphony, Tina is immediate past concertmaster of the Santa Cruz Symphony (retired in 2016, after 17 years) and the Diablo Symphony (retired in 2015, after 20 years). Read the tribute article “Farewell and Best Wishes, LAS Concertmaster Tina Anderson” by LAS Music Director Lara Webber on page 2 of the June 2020 issue of our Symphony Notes newsletter. 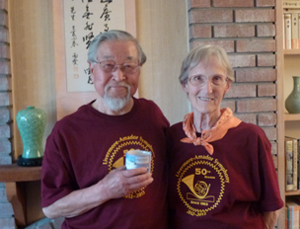 Hildi and her husband, Sang-Wook Kang,
soon after they attended the celebration of
the 50th season of LAS at the
Asilomar State Beach and Conference Grounds
in April 2013.

Hildi Kang, 1934–2019
An author and scholar, Hildi Kang had a lifelong love and appreciation of music. She passed away peacefully, surrounded by her family, on October 9, 2019, at the age of 85. Growing up in Oakland, she played piano and directed a children’s choir. As an adult living in Buffalo, New York, she played guitar and sang in her church choir. As a Livermore resident starting in the mid-1970s, she promoted music at her church, organizing hymn-singing and chamber groups. At age 72, she began cello lessons. Hildi joined LAS at the beginning of the 2010–2011 concert season; she retired from the orchestra in June 2019. Her family asks that we “please consider making a donation in her name to the charity of your choice.”

Margaret Morrad, 1935–2015
Margaret Helen Morrad-Burke passed away on June 4, 2015, at the age of 79. She played violin in the orchestra, had a great love of music, and was a sectionals host extraordinaire. A celebration of Margaret’s life included string quartet music featuring several LAS musicians. 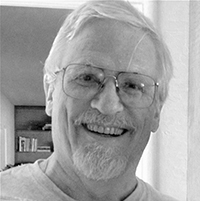 Paul Kasameyer, 1943–2014
The Symphony was saddened by the sudden passing of percussionist and keyboardist Paul Kasameyer, who died unexpectedly on March 22, 2014. As Kathy Boster noted on the LAS Facebook page, we miss his kind, gentle, generous, and selfless spirit. Many donations to the Symphony’s music fund were made in his memory, and in 2017 the Kasameyer family donated a set of four beautiful professional hammered-copper timpani to the Symphony in memory of Paul.

Virginia McFann, violin, had probably been to more LAS rehearsals
and played in more LAS concerts than anyone. 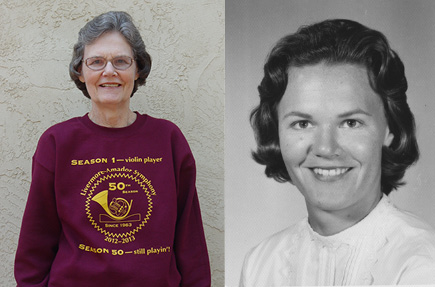 JoAnn Cox, violin, played in LAS for 47 of
its first 50 seasons; she missed 3 seasons
along the way while caring for family members. 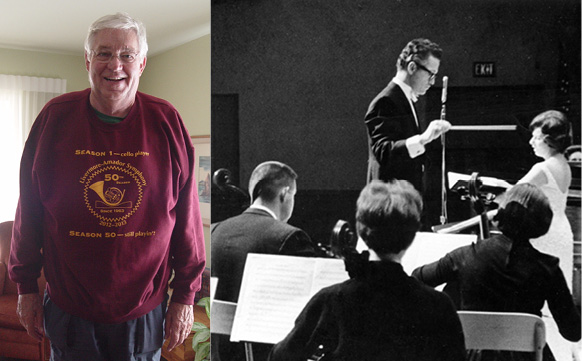 David Walter, cello, played with LAS in its early years
and then sporadically; in late summer 2013 he moved
from his longtime Livermore home to a new home in Idaho,
but he played in the LAS December 2013 concert!

These role-model players—Virginia McFann, JoAnn Cox, and David Walter—were presented with commemorative sweatshirts in appreciation of their status as “living history” members of the Livermore-Amador Symphony. The sweatshirts display the 50th-season logo plus
“SEASON 1—violin player” or
“SEASON 1—cello player” and
“SEASON 50—still playin’!”

2013 Asilomar Retreat
Even the weather was excellent at the 50th Season Celebration Retreat (April 19–21, 2013). See photos and read comments about the retreat. 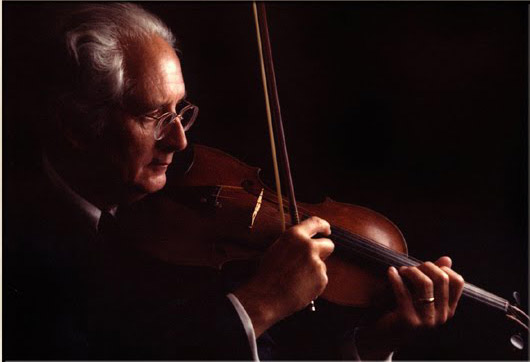 
Al Oliver, a founding member of the symphony, died on June 24, 2011. A memorial was held on July 9; it included music performed by a string quartet and a cello duo comprised of LAS musicians. Read a biography posted by Al Oliver’s family. 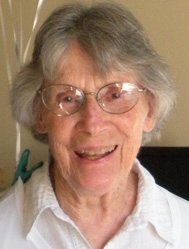 On January 2, 2011, beloved orchestra member and longtime community volunteer Marion Clark died. A memorial concert was performed in her honor on February 5. Learn more about both Marion and Arnold Clark. 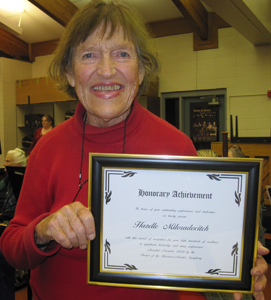 Hazelle Miloradovitch
was honored
on 11/2/10. 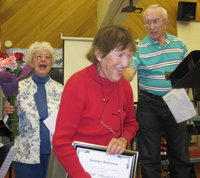 Hazelle Miloradovitch was honored at the orchestra rehearsal on November 2, 2010. The festivities began with a few words from her good friend, Music Director and Conductor Art Barnes. Then Association President Ron White called Miloradovitch forward and gave her a certificate from the board of directors in honor of her “outstanding performance and dedication” and in recognition of her “high standards of excellence in symphonic leadership and string performance.” There were flowers, presented by Jean King, and cake. Known for being friendly yet forceful and for her fine violin and viola playing, Miloradovitch plays viola in the orchestra and during more than forty years in LAS has served as concertmaster and as viola section leader. 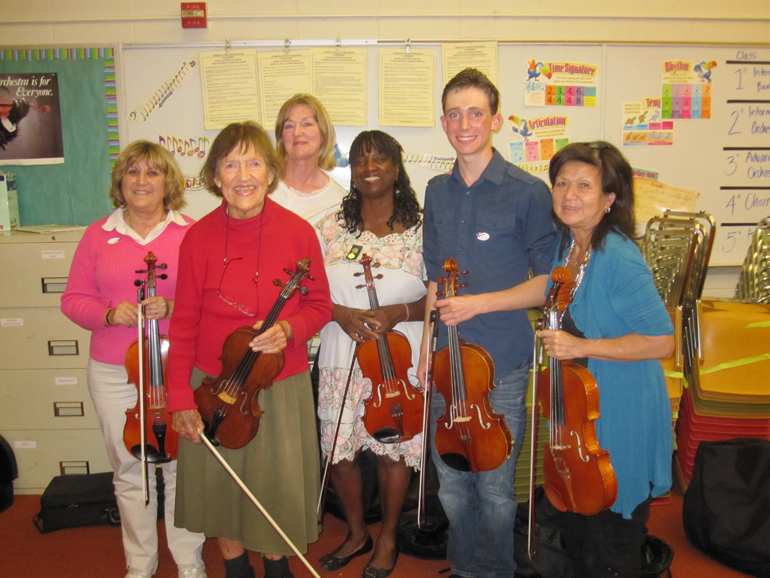 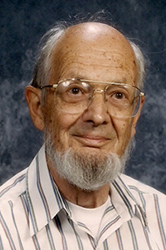 On Nov­ember 13, 2009, beloved orch­estra member and long­time community volunteer Arnold Clark died. A memorial concert of “Memories and Music” was performed in his honor on January 23, 2010. Learn more about both Marion and Arnold Clark.